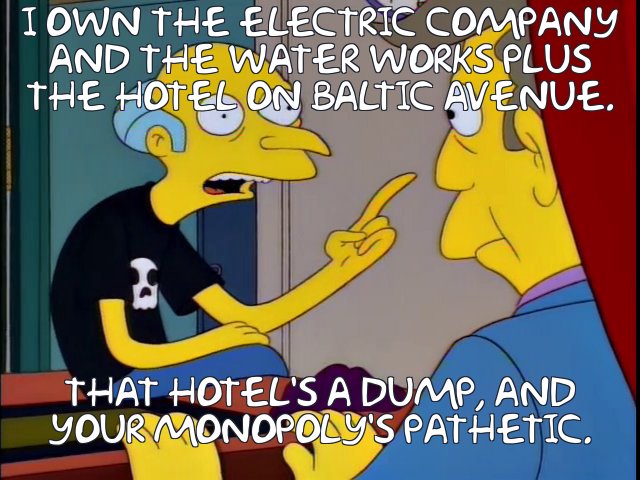 Many people think that the rules of Monopoly are like a family recipe for chili. They start with what’s printed on the box and make it their own. Let me explain why those people are wrong.

Object of the game

The point of the game is “to become the wealthiest player through buying, renting and selling of property,” driving the other players towards bankruptcy. House rules gum up the works, which is why people think Monopoly games take hours to play. Tournament games actually take only 90 minutes.

Perhaps the most common house rule is the “free parking” rule: Anyone landing on “free parking” gets $500 plus whatever money had previously been paid by players as taxes and fees. This house rule is flatly disallowed by the official Monopoly rules: “A player landing on this place does not receive any money, property or reward of any kind. This is just a ‘free’ resting-place.”

It’s easy to see why this rule is popular: Monopoly is commonly played with children, and children like receiving money. It’s also easy to see why this rule breaks the game. It makes the game more random. And, when a weaker player receives the money, it delays that player’s bankruptcy, which makes the game go on interminably. It is necessary for weaker players to go bankrupt for the game to end because there is a snowball effect when a player goes bankrupt. All of a bankrupt player’s properties are transferred to another player (or “players” if the bankrupt player’s debt was to the bank), which means more color groups are assembled and improvements can be made, which means there are more dangerous squares on the board for the remaining players.

Some might argue that injecting cash into the game avoids the problem that players will choose to conserve cash and not buy properties they land on. But this is not correct because, according to the rules, properties are auctioned off if the landing player chooses not to buy them, explained in the next section.

When a player chooses not to buy the property he lands on, the rules say that the property should be auctioned by the bank to the highest bidder. The rules explicitly allow all players to participate in the auction, and bidding may start at $1. Every property is worth buying at that price; at the very least, the property could be immediately mortgaged for more money. Therefore logic would dictate that every property is bought when first landed on.

But many players choose to ignore this rule. This is another legacy of children playing Monopoly: Children don’t understand auctions or property valuation, so the rule is not taught to them. Instead, it is common to go around asking if anyone wants to buy the property at full price, and if not, the next player takes his turn.

The auction rule distributes properties early in the game and makes it more likely that color groups will be assembled, because a player who needs the property to complete a color group will usually bid higher than other players. Therefore, omitting the auction rule causes games to last longer.

Once all the properties are bought up, the players should trade among themselves to assemble at least a few color groups. (Later there will also be trading out of desperation, of course.)

But in a lot of games, there’s little to no trading. This is again the problem that children play Monopoly but don’t understand property valuation. It’s not fun for anyone if Daddy shrewdly bargains against Little Susie for New York Avenue and drives her into bankruptcy. So the players go around and around the board for hours until a player wins due to random events, like a marathon version of Chutes and Ladders. “Playing Monopoly” in a meaningful sense requires more than the ability to roll the dice and read the words printed on the Chance and Community Chest cards.

The first of these is “non-cash transactions.” As mentioned above, trading properties among players is essential to assembling color groups and, hence, finishing the game. Suppose Player A wants a certain property from Player B. Can Player A make a non-cash offer, such as “immunity” from rent (or discounted or delayed rent) when Player B lands on his property? No, this is flatly against tournament rules: “All trades are based on assets owned at the time of the trade. No options or immunity from paying future rents may be granted, nor may partnerships be formed.”

Another house rule is allowing “disguised loans.” For example, two players could trade a Get Out of Jail Free card back and forth for inflated amounts of money. (There is actually an explicit tournament rule against selling a Get Out of Jail Free card for more than $50 to prevent this form of a disguised loan.) Although there is no explicit rule against doing the same with, for example, Water Works, a tournament judge would hold that it violates the rules.

There is an odd confluence of rules, which read a certain way, would seem to allow one player to forgive another player’s obligation to pay rent.

So, in theory, if Player A lands on Player B’s property, and Player B intentionally does not ask Player A to pay rent, there is nothing anyone else can do to force Player B to collect rent. But if it is obvious that Player B is intentionally choosing not to collect rent from Player A, the other players could ask a judge to set things right.

On the other hand, if Player B were to discount his rent, this would clearly violate the first rule above.

Any right-thinking person can see that this kind of nonsense has no support in the official rules and does not promote the purpose of the game. In many cases the tournament rules have explicitly prohibited these house rules.