What was this about gay smurfs? 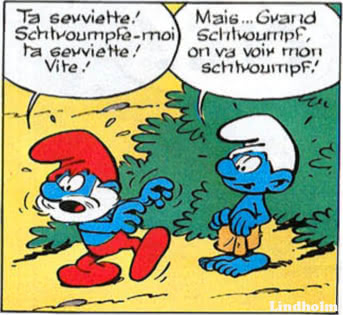 A hundred shirtless dudes living alone in the woods sounds pretty gay. But the foundational question is, do smurfs have cocks? The answer is yes! In the comic Les Schtroumpfs et le Cracoucass, there’s a smurf who goes around wearing a towel instead of pants. At one point, Papa Smurf demands the towel, and the smurf responds, “But Papa Smurf, we will see my smurf!” The word “smurf” is used in the masculine singular in French (“mon schtroumpf”) and very likely means “pénis” or “zizi.” Which means this smurf has a cock and so all the male smurfs have cocks.

And the next question is, do smurfs even have the concept of gayness? Yes again! In the comic La Schtroumpfette, Smurfette has the smurfs dance in pairs instead of in a line, and one of the smurfs asks another, “You find this gay, don’t you?”

In the cartoon, Vanity has a “swish” voice and uses extravagant language (though not quite as theatrical as another Hanna-Barbera character, the pink cat Snagglepuss), which suggests that Vanity is a homosexual. Sometimes he chases after Smurfette just like all the other male smurfs, suggesting he may be bisexual or closeted, but sometimes he doesn’t! In My Smurfy Valentine he chooses to write a valentine to himself instead of Smurfette and in A Circus for Baby he chooses to kiss his own reflection instead of Smurfette. In Beauty Is Only Smurf Deep, Vanity chooses to befriend the vain, beautiful pixie princess rather than seducing her. In The Hundredth Smurf, when Vanity is magically duplicated, the two Vanities climb into bed together. (When Papa Smurf was duplicated in a different episode, Papa Smurf, Papa Smurf, the two Papa Smurfs pointedly did not share a bed.) It is true that Vanity does not pursue any men other than himself, however (a) there are no other gay smurfs or friends of smurfs, as far as the viewers know and (b) there are many gay couples where the two men or two women look very much alike. Being vain does not mean Vanity is not gay.

The cartoon more directly addressed the issue of homosexuality in The World According to Smurflings, where Mother Nature decides not to “fix” two squirrels with corkscrew tails who are in love because they like the way they are.

Is the portrayal of Smurfette as an unmarried female smurf in a community of 100 male smurfs accurate?

Absolutely. In episodes like Romeo and Smurfette Smurfette contemplates choosing a husband but realizes that she could not choose a single smurf to marry. This is 100% accurate, according to sociological research findings from Joe Rogan. Joe also suggests a possible reason that Smurfette is not tasked with any useful function in the village, that she is too busy with conjugation.